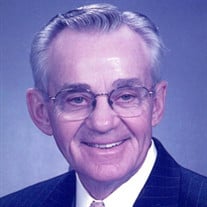 Dr. Bill Joe Swan, 89, passed away Saturday, December 26, 2020, after years of declining health due to Parkinson's Disease at The Gardens of Taylor Glen in Concord. A private funeral service is scheduled for 2:00 pm Wednesday, December 30, 2020, at Lady's Funeral Home Chapel. Pastor Steve Hargett will officiate. Interment will follow at Carolina Memorial Park Mausoleum in Kannapolis. Bill was born August 6, 1931 in Martel, TN. He was a son of the late Paul Watt Swan and Mildred Russell Fox Swan. He graduated from Farragut High School in 1949 and attended the University of Tennessee in Knoxville for two years. He then entered the University of Tennessee Medical School in Memphis. While he was in medical school, he was elected President of his medical class, President of the All Students Club and President of his medical fraternity, Alpha Kappa Kappa. He graduated with his medical degree in 1954. After graduation, he moved to Shreveport, LA for his internship at Confederate Memorial Hospital. He married Lillian Bevins on October 8, 1955 in Concord, Tennessee. They enjoyed 65 years of marriage. Bill's Medical Career began in Hammond, Louisiana, where he worked at Lallie Kamp Hospital. He was then drafted as a Captain into the US Army Medical Corps, where he served two years as an anesthesiologist at Valley Forge Army Hospital in Pennsylvania and at Fort Bragg. Following his military service, he completed a two-year residency in anesthesiology at Ohio State University. In 1960, he came to Concord to practice anesthesia at Cabarrus Memorial Hospital. He cared for many patients in the 29 years that he served there. Having passed the required examinations, Bill became board certified in anesthesiology. He served terms as President of the Cabarrus Medical Society, as well as the North Carolina Anesthesia Society. Bill enjoyed working with Boy Scout Troop 3, sponsored by First Presbyterian Church of Concord. He was inducted into the Order of the Arrow and was awarded the Silver Beaver for his volunteer service. He was grateful that his two sons became Eagle Scouts. He worshipped at Concord First Assembly, where he was a longtime member. He served on the Church Steering Committee and as Chairman of First Assembly School Board. He memorized and received great comfort from his favorite scripture passage, Psalm 23. After retirement, he enjoyed golfing, woodworking, making furniture, and traveling with his wife. He wrote a copyrighted book, The Life of a Boy from East Tennessee, because he wanted his children and grandchildren to have an appreciation for their roots and family background. A copy of the book is in the library at The Gardens of Taylor Glen, where he and his wife have been residents since 2014. In addition to his parents, he was preceded in death by sister, Barbara Swan Guinn; and brother, Paul Russell Swan. Dr. Swan is survived by three children, Brenda Swan Hammill (Curt) of Burke, VA, Kenneth Allan Swan, CAPT, USN (Ret.) (Karen) of Yorktown, VA and Paul Robert Swan (Lisa) of Mount Gilead, NC; 11 grandchildren, Kristyn Swan Beam (Andrew), Wesley Swan, Brandon Swan (Cara), Travis Hammill (Rachel), Katie Swan Hickey (Robert), Masha Swan (Carlos), Austin Swan (Sara), Kendall Swan, Maggie Swan (Alex), Carson Hammill and Quinton Swan; six great grandchildren, Cillian, Vitaly, Amalia, Katerina, Hallie and Rowan. In lieu of flowers, memorials may be sent to Multiply Church (formerly Concord First Assembly), 150 Warren C. Coleman Boulevard N, Concord, NC 28027 (https://multiply.church/concord/). Taylor Glen provided such loving care for Bill in his last days. The family is grateful for the kindness and dignity that the staff afforded Bill. Remembrances may be sent to the family online at www.ladysfuneralhome.com. Lady's Funeral Home & Crematory is assisting the family of Dr. Swan.

Dr. Bill Joe Swan, 89, passed away Saturday, December 26, 2020, after years of declining health due to Parkinson's Disease at The Gardens of Taylor Glen in Concord. A private funeral service is scheduled for 2:00 pm Wednesday, December 30,... View Obituary & Service Information

The family of Dr. Bill Joe Swan created this Life Tributes page to make it easy to share your memories.

Send flowers to the Swan family.