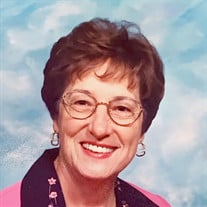 Mrs. Carol Ann Church Howard, 78, went Home to be with her Lord and Savior Jesus Christ on Monday, April 5. 2021, after a long battle with pancreatic cancer. Throughout this illness, she touched the lives of many wonderful medical personnel with her strong faith. She faced every obstacle with the mindset that God loves her and that He is in control. Her question to everyone was whether or not they knew Him, and if not, could she make the introduction. A funeral service will be held Thursday, April 8, at 2 pm, at Miami Baptist Church, 6701 Miami Church Road, Concord, NC 28025 where she was a member. The service will be officiated by Rev. Scott Faw and the Rev. Eddie Barbee. Interment will be at Happy Valley Memorial Park in Elizabethton, Tennessee. The family will receive friends from 6 to 8 pm, Wednesday, April 7, at Lady’s Funeral Home, 268 N. Cannon Blvd., Kannapolis, NC 28083. She will also lie in-state from 1 -2 pm prior to the service Thursday. Mrs. Howard was born June 14, 1942, to the late Cline Church and Dolly Morton Church. She grew up in the Elizabethton, Tennessee area where she met and fell in love with a young preacher. Because of her maiden name, the joke was that her husband had “married the church and was raising a Sunday School.” Carol was the model “pastor’s wife,” and was constantly engaged in serving alongside her husband in many capacities but mostly in the area of music. She spent many years playing the piano or as Director of Music as her own father had while she was growing up. After her children were in school, Carol went back to college in order to become a better church musician. She subsequently earned 2 different music degrees from Wingate University in 1979 and 1981. After a few years of almost daily duty as a substitute teacher, she earned certification to teach middle school language arts and social studies. She later returned to Wingate to earn a Master’s Degree in Education in 1994 and was also a National Board Certified Teacher. Carol spent 21 years teaching full time at East Union Middle School in Union County, and then Kannapolis Middle School in Cabarrus County, touching the lives of many students. Carol is survived by her beloved husband of 58 years, Rev. Robert Dallas Howard; her son Barry R. Howard and wife, Sabrina of Matthews; her daughter, Donna Howard Belk and husband Randy of Lincolnton; three grandchildren, Christopher Olin Belk, Macie Caroline Belk, and Samuel Robert Dallas Howard; brothers Gene Church and Glenn Church and wife Joyce, all of Elizabethton, Tennessee; and many nieces and nephews. In lieu of flowers, memorials may be made to Miami Baptist Church Building Fund, c/o Linda Eliff, 6701 Miami Church Road, Concord, NC 28025.

Mrs. Carol Ann Church Howard, 78, went Home to be with her Lord and Savior Jesus Christ on Monday, April 5. 2021, after a long battle with pancreatic cancer. Throughout this illness, she touched the lives of many wonderful medical personnel... View Obituary & Service Information

The family of Carol Ann Church Howard created this Life Tributes page to make it easy to share your memories.

Send flowers to the Howard family.