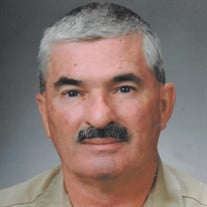 David Gwen Harless, 65, went home to be with the Lord on Tuesday, March 24, 2020, while surrounded by his family at his home in Kannapolis. Born on August 1, 1954, he was the third of seven children born to Hursel and Sadie Harless. David was a proud veteran of the United States Navy where he served from 1972-1975 in the VF 24 Squadron on the USS Hancock. He later worked as the head certified locksmith at Atrium Health Cabarrus where he was on staff for 28 years before retiring in 2017. He enjoyed working on numerous outdoor projects, tending to his grapevines, picking muscadines from his backyard, baking oatmeal cookies and telling old stories which we will always treasure. He was a member of The Brook Church in China Grove, where his son, Jon, is the Senior Pastor. David was a loving husband, father and grandfather who will be sorely missed. In addition to his parents, he was preceded in death by his older brother, Kenneth Ray Harless; two nieces, Rachel Stanton and Amy Harless; and his long time four-legged companion, a black lab named Mollie. David is survived by his wife, Donna Baker Harless; two sons, Joshua David Harless and wife Jessica and Jon Alan Harless and wife Emily; and five grandchildren, Kaydee, Christian, Aubree, Elizabeth and Marlee; Maggie May (his second black Labrador); four sisters Wanda Allman (Rick), Janet Pethel, Karen Richardson, Carolyn Rowell (Scott); and brother Daniel Harless (Gina). Due to the unforeseen circumstances of the government mandates from the coronavirus outbreak, a private graveside service will take place at Carolina Memorial Park. Visitation for friends and family will be held at the home of Jon and Emily Harless, 434 Laurel Crest Drive, Kannapolis on Friday from 2 to 4:00 pm. Memorials can be made to The Brook Church 2290 South US 29 Highway, China Grove, NC 28023 or Hospice of Cabarrus County 5003 Hospice Lane, Kannapolis, NC 28081. During this difficult time, please send a “Hug from Home” to the family.

David Gwen Harless, 65, went home to be with the Lord on Tuesday, March 24, 2020, while surrounded by his family at his home in Kannapolis. Born on August 1, 1954, he was the third of seven children born to Hursel and Sadie Harless. David... View Obituary & Service Information

The family of David Gwen Harless created this Life Tributes page to make it easy to share your memories.

David Gwen Harless, 65, went home to be with the Lord on Tuesday,...

Send flowers to the Harless family.