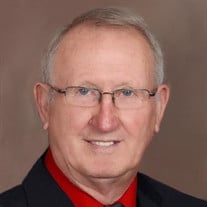 Mr. David Ketchel White, 77, passed away Wednesday, December 5, 2018, at Carolinas HealthCare System-NorthEast in Concord. A funeral service is scheduled for 7:00 pm Wednesday, December 12, 2018, at Kannapolis Church of God. Dr. Greg Sloop and Rev. Barbara Watkins will officiate. A graveside service is scheduled for 1:00 pm Thursday, December 13, 2018 at Carolina Memorial Park in Kannapolis. Interment will follow. The family will receive friends from 5 to 6:45 pm Wednesday at Kannapolis Church of God. Mr. White was born April 26, 1941 in Iredell County. He was a son of the late Worth William White and Clara Mayhew White. He was a member of Kannapolis Church of God for over 40 years, where he served as an Elder, in the church band, Sunday School leadership and as a prayer leader. He retired as Director from the YMCA after 40 years. In addition to his parents, he was preceded in death by a brother, Mescal White. Mr. White is survived by his wife, Carol Munday White; three children, Natalie White of Cleveland, TN, Christopher White of FL and Lorissa Griggs and husband David of Salisbury; five sisters, Ruth Webb of NV, Dianne Kidd and husband Jimmy of Kannapolis, Emily Gurley of Cooleemee, and Judy Reed and Gloria Shue, both of Concord; one brother, Dean White and wife Shirley of Kannapolis; five grandchildren, Damian White, Aaron White, Heaven White, Caleb White and Brooklyn Griggs; and two great-grandchildren, Amelia Rose White and Sebastian White. Memorials may be sent to Kannapolis Church of God, 2211 West A Street, Kannapolis, NC, 28081.

The family of David Ketchel White created this Life Tributes page to make it easy to share your memories.

Send flowers to the White family.