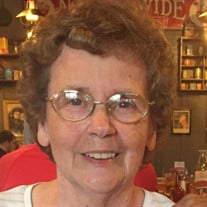 Mrs. Doris Ann Gaultney Hubbard, 78, of Kannapolis passed away peacefully on Saturday, July 13, 2019, after a long battle with Alzheimer’s. Funeral services will be held at 12:00 pm Tuesday, July 16, 2019, at Lady’s Funeral Home Chapel. Mr. Ralph Lentz will officiate. Burial will follow at West Lawn Memorial Park in China Grove. The family will receive friends from 11 to 11:45 pm at Lady's Funeral Home. Doris was born on March 10, 1941 in Crumpler, NC (a place she would always refer to as the most beautiful place in the world). She was a daughter of the late Munsey Gaultney and Elsie Moore Gaultney. She would later move to Kannapolis where she would meet her late husband of 57 years, Mr. Bobby Gene Hubbard Sr. Doris was a woman ahead of her time and spent nearly three decades as the owner of a successful laundromat. She was also a longtime member of Central Baptist Church in Kannapolis. In addition to her parents and husband, she is preceded in death by a son, Bobby Gene Hubbard, Jr. and her sister, Sandra Puckett. Mrs. Hubbard is survived by a son, Jeff Hubbard and wife Sarah of Kannapolis; daughter, Kelly Nagpal and husband Sunil of Concord; eight grandchildren, Vijay, Justin, Jordan, Caitlin, Dakota, Jorge, Jacob and JJ; and two great-grandchildren, Andrew and Coraline. The family requests that in lieu of flowers that donations be made to the Alzheimer’s Association either on her tribute page online or by mail, Alzheimer’s Association, PO Box 96011, Washington, DC 20090-6011.

The family of Doris Ann Gaultney Hubbard created this Life Tributes page to make it easy to share your memories.