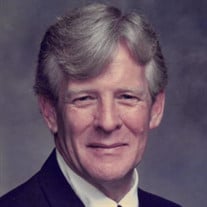 Mr. Dwight Franklin Goodnight, 88, passed away Monday, Jan. 18, 2021, at his residence with his family surrounding him. He was born Sept. 15, 1932, in Kannapolis, Cabarrus County, and was the son of the late Reyn William Goodnight and Connie Lipe Goodnight of Kannapolis. Mr. Goodnight lived his entire life in Kannapolis. He was a veteran of the U.S. Army and played trumpet and drums in the Army band. On June 25, 1960, he married Judith “Judy” Eleanor Faust at the First Presbyterian Church of Kannapolis, where they met and were lifelong members. He was active in various ministries of the church. Mr. Goodnight trusted the Lord Jesus deeply and loved his Savior very much. He worked for Cannon Mills in several jobs over the years, including as a dispatcher in the shipping department. He was an avid rose gardener and enjoyed planting and raising tomatoes each year. He was preceded in death by his wife and is survived by three sons, Dwight Tod of the home, Paris Thad and wife Nancy of Salisbury, and Dana Jon and wife Carol of Hillsborough; daughter, Desiree Starla Goodnight of Charlotte; six grandchildren: Caleb Miles (and wife Hannah and their sons, Dwight’s great-grandsons, Jack and Bobby and great-granddaughter Autumn), Kenan Jon (and wife Abby), Micah Lee, Davis W., Sarah Noelle, and Robert Franklin Goodnight; and brother-in-law Bobby Faust and wife Shirley. A graveside burial service will be planned later and Lady’s Funeral Home & Crematory is assisting the family. In lieu of flowers, donations may be made to First Presbyterian Church or the Unity United Methodist Church’s meal ministry, 8605 Unity Church Road, Kannapolis, NC 28081.

Mr. Dwight Franklin Goodnight, 88, passed away Monday, Jan. 18, 2021, at his residence with his family surrounding him. He was born Sept. 15, 1932, in Kannapolis, Cabarrus County, and was the son of the late Reyn William Goodnight and Connie... View Obituary & Service Information

The family of Dwight Franklin Goodnight created this Life Tributes page to make it easy to share your memories.

Send flowers to the Goodnight family.