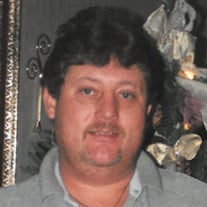 Mr. Gerald Wayne Henry, 57, passed away Tuesday, January 26, 2021, at his home in Kannapolis. A funeral service is scheduled for 11:00 am Saturday, January 30, 2021, at Lady's Funeral Home Chapel. Rev. Gene Beaver will officiate. Interment will follow at Carolina Memorial Park in Kannapolis. Due to current COVID protocols, masks are REQUIRED. The family will receive friends from 6 to 8:00 pm Friday at Lady's Funeral Home. At other times, the family will be at his home, 621 West 22nd Street. Mr. Henry was born August 7, 1963 in Cabarrus County. He was a son of Mary "Peggy" Williams Kreider of Supply, NC and the late Walter Andrew Henry. He worked for Keter USA, Inc. in Stanley, NC as a maintenance supervisor. Gerald was a hard worker and always provided for his family. He loved going to the beach, working on cars and his 80's Rock 'n Roll. Gerald was a loyal friend who would help anyone as he never met a stranger. His son was his World, loved his wife very much as well as loved playing and spending time with his grandsons. In addition to his father, he was preceded in death by a son, Joshua Henry; two brothers, Larry Thomas Henry and Walter Leroy Henry; and step-father, John Kreider. In addition to his mother, he is survived by his son, Gerald Wayne Henry, Jr., Kannapolis; step-daughter, Linda Cherie Furr of Kannapolis; wife, Wanda Hines Henry of Concord; and six grandsons, Grayson, Nicholas, Ayden, Fisher, Dale, Jr. and Levi, all of Kannapolis.

The family of Gerald Wayne Henry created this Life Tributes page to make it easy to share your memories.

Send flowers to the Henry family.