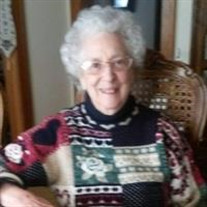 Mrs. Hazel Marie Thomas Leatherman, 95, of Ellington, MO, previously of Toronto, KS, passed away on Thursday, December 9, 2021 in Ellington, MO. A funeral service is scheduled for 11:00 am Monday, December 20, 2021, at North Kannapolis Wesleyan Church. Interment will follow at Carolina Memorial Park in Kannapolis. The family will receive friends from 10 to 10:45 am Monday at North Kannapolis Wesleyan Church. Hazel Marie Thomas, the oldest of five children born to Roy. E. and Irma L. Armstrong Thomas, was born in Danville, January 19, 1926. A few years after her birth the family moved to North Carolina, and after a few moves, they ended up living in Kannapolis, NC. Hazel attended school in Kannapolis and graduated from J. W. Cannon High School in 1943. After high school Hazel worked and attended the Pilgrim Bible College in Kernersville, NC. In 1952 she transferred to Marion College in Marion, IN and graduated from there in 1954 with a B.S. in Elementary Education. For the next four years, Hazel taught first grade in Landis, NC. In September 1959 she went to Northern Rhodesia, now Zambia, as the country was gaining its independence and the British were turning the government services and schools over to the new government. There she taught local educators how to teach elementary school. Hazel was stations at Chabbaboma and Siachitema Missions and returned to the states in September 1964. After her return to the states, Hazel worked for the Pilgrim Holiness Church and then became the Dean of Women at Bartlesville Bible College in Bartlesville, OK. While taking a quartet from the college to sing at the Pilgrim Holiness Church in Toronto, KS she met Oliver "Bud" Leatherman, the minister at the church. Hazel and Bud were married in Kannapolis on June 9, 1966. For several years, Hazel was a substitute teacher at the Toronto Grade School and later, for thirteen years, she was a full-time teacher for the third and fourth grades. Hazel was ordained as a minister in the Wesleyan Church in June 1968 and served with Bud until their retirement in 1993. After their retirement, Hazel and Bud traveled and camped throughout the United States and enjoyed visiting the national parks. For many years, they spent their winters in Apache Junction, AZ. Bud passed away on March 17, 2018. Hazel was preceded in death by her parents; her husband; Dewey Thomas; and sister, Joan Ragan. She is survived by step-daughter, Linda Richards and husband Curtis; step-son, Lorren Leatherman and wife Donna; step-granddaughters, Kristen Guerrero and husband Zach and Amanda Wilkinson and husband Corey; step-grandchildren, Gabby Guerrero, and Drake and Deacon Wilkinson; sisters, Faith Amspaugh and Lylan Beam ad husband Larry; and many nieces and nephews. In lieu of flowers, the family requests memorials to be made to Global Partners Misions.

The family of Hazel Marie Thomas Leatherman created this Life Tributes page to make it easy to share your memories.

Send flowers to the Leatherman family.