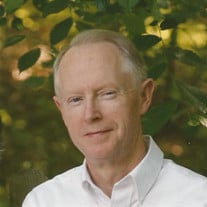 Mr. Hearne Franklin “Rick” Rickard II, 77, resident of Kannapolis, NC, passed from death to life eternal on Wednesday, February 5, 2020. A funeral service is scheduled for 2:30 pm on Sunday, February 9, 2020, at First Baptist Church in Kannapolis. Dr. Tom Cabaniss will officiate. Entombment will follow at Carolina Memorial Park Mausoleum in Kannapolis. The family will receive friends from 1:00 pm to 2:30 pm Sunday at First Baptist Church prior to the service. Rick was born on November 1, 1942 to the late Hearne F. Rickard and Ava Cook Rickard. He attended A.L. Brown HIgh School, graduating in 1960. He attended Appalachian State University for two years prior to attending the University of North Carolina at Chapel Hill, where he graduated with a BS in Pharmacy in 1966. He was an officer in Phi Delta Chi fraternity. After graduation, Rick served as a pharmacist at Martin Drug Company and Jackson Park Pharmacy, both in Kannapolis. He bought Martin Drug Company in 1971 and worked there until his retirement in 2010. His customers admired his compassion, patience, and concern for their care. In addition to his work as a pharmacist, Rick served in many capacities in the churches he attended during his lifetime including St. John’s Reformed, North Kannapolis United Methodist, and First Baptist. His enjoyment of music began in childhood as a member of the Kannapolis Boys Choir. He sang in the chorale at ASU, the UNC Glee Club, all three church choirs and the Rowan County Community Chorus. Rick was a nature enthusiast, and enjoyed spending time outdoors gardening, fishing, and bird watching. He was an amater photographer, and also enjoyed traveling across the country to natural and historical sites. He was a former member of the Kannapolis Chamber of Commerce and the Kannapolis Planning Board. Rick is survived by his beloved wife of 49 years, Danita Brigman Rickard; daughter Amy Rickard of Chapel Hill; son Alex Rickard and wife Mari Rickard of Fuquay-Varina and granddaughters Liana and Kiersten; and nephew, Casey Rickard of Kannapolis. In addition to his parents, he was preceded in death by his brother, Carl Arnold Rickard. In lieu of flowers, memorials may be sent to First Baptist Church, 101 N Main Street, Kannapolis, NC 28081, The Nature Conservancy, 4245 N. Fairfax Drive, Suite 100, Arlington, VA 22203-1606, or the UNC Eshelman School of Pharmacy, 301 Pharmacy Lane, Chapel Hill, NC 27599-7355.

The family of Hearne Franklin Rickard II created this Life Tributes page to make it easy to share your memories.

Send flowers to the Rickard family.