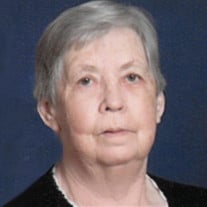 Mrs. Jean White Purvis Troutman, 91, passed away Thursday, June 27, 2019, at her home in China Grove. A private graveside service will be held on Monday at Salisbury National Cemetery. Chaplain Misty Baker will officiate. Mrs. Troutman was born October 14, 1927 in Magherafelt, County Londonderry, Northern Ireland. She was a daughter of the late William Purvis and Agnes Elizabeth Cooks Laughlin Purvis (Sissy). After graduation from school, Jean joined the British Military Service where she became a Corporal with the women's Royal Army Corp, eventually being stationed in Berlin, Germany, where she met and married John Troutman (U.S. Army) in January 1955. Jean has always been a caretaker in her lifetime and took care of numerous family members in their later years. She was also "Mama Jean" to many children which she kept in the home. Her love for each of them grew as she watched them grow and become adults. Many stopping by for visits and hugs over the years. In addition to her husband, Jean is survived by her son, Neil Troutman of Wilmington, NC; daughter, Shauna (Kevin) Wale and granddaughter, Taylor of Salisbury. Also surviving is her sister, Sophia Boyle of Northern Ireland; special friends, Lizbeth Murph and Syliva Graham, who provided great care for Jean over these last months of her life; also numerous nieces and nephews in Ohio, Northern Ireland, England and New Zealand. In addition to her parents, Jean was preceded in death by her brothers, Ernie and Archer Purvis; and sister, Sally Andrews. Memorials may be sent to the Humane Society of Rowan County, Post Office Box 295, Salisbury, NC 28145-0295 or to the Charity of the Donor's Choice. The family would like to thank Community Hospice for the love and care they showed to Mrs. Troutman over the last five months.

The family of Jean White Purvis Troutman created this Life Tributes page to make it easy to share your memories.