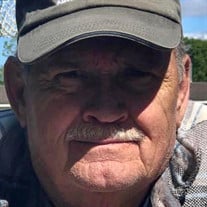 Mr. John “Johnny” Henry Hall, 77, passed away Saturday, April 23, 2022, at the Glenn A. Kiser Hospice House in Salisbury. Services were held at Lady’s Funeral Home Chapel in Kannapolis with Rev. John Taylor officiating. Interment followed at West Lawn Memorial Park in China Grove. Born March 21, 1945 in Rowan County, he was the son of the late Edward Madison Hall and Margaret Maness Hall. Johnny is survived by his wife of 56 years, Sharon McCubbins Hall; daughter, Teresa Hall Fallin and husband Todd; son, John Alan Hall and wife Susan; eight grandchildren, Tyler Hall, Jacob Hall, Denver Litaker, Alexus Dean, Landon Litaker, Hayden Lee Litaker, Ruby Fallin and Eli Fallin; and one great grandson, Walker Litaker. Johnny was affectionately known by his grandchildren as “Papa” and “HipHop”, and was of the Christian faith. A star wrestler at Boyden High School in the 1960s, Johnny completed 11th grade, then went to work in the spinning room at Cannon Mills, Plant #7, then later as a supervisor. Johnny was was quite good at bowling at Woodleaf Lanes, where he and Sharon bowled together in leagues in the 1970s-1980s. He was also great at pitching horseshoes with his best friend, Dean Wyrick. Our dad loved the ocean and collecting shark teeth. He had a keen eye for detecting the shiny black surfaces of the fossils and taught us to do the same. Eli and Jacob have carried on this tradition. Fort Fisher remains our favorite vacation spot. Our dad saw the beauty in all things in life and always supported the least fortunate, be that animals, people, teams, etc. Along with enjoying the little things, came an incredibly creative mind and an infectious sense of humor. Enthralled with finding treasures on the shore as children, Dad told us “Sea Stories” about any object that we would find and present to him. A mere piece of driftwood became a part of BlackBeard’s Ship; a seashell with a hole became a mermaid’s necklace. Our Dad could identify any object that we found and would tell us the adventurous stories. One of his favorite places to be was on his deck whistling at birds with Sharon and pointing out the planes flying overhead. Dad had a deep love for animals, especially his cats. Though he faced many health issues over the past few years, dad always had a way of making us laugh through the tough times. He had a worker’s heart and a very gentle soul, an imaginative mind and an adventurous spirit. We are so thankful for those who provided care to our dad in the ER and CCU at Novant Rowan during his last hospitalization, and those at the Kiser Hospice House.

The family of John Henry Hall created this Life Tributes page to make it easy to share your memories.

Send flowers to the Hall family.