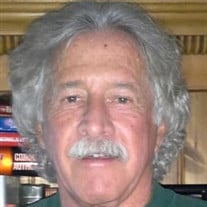 John Knox McInnis (“John K”), age 72, passed away on Saturday, February 6, 2021. Born in Concord, NC on November 22, 1948, he was the son of the late John Flake McInnis and Gladys Goodman McInnis. He is also predeceased by his sister, the late Mary Hugh McInnis Perry. John K leaves behind brother-in-law, Jack Perry of Rocky Mount; nephew, John Duncan Perry of Rocky Mount; niece, Laura Perry Cotto and husband, Tony, of Holly Springs, NC; and his great niece and nephew Caroline and Christopher Cotto. John K was a proud 1967 graduate of Concord High School where he was an All-State football player. During the summers, John K was a fixture around the YMCA pool run by his father where he taught swimming lessons. John K attended Pfeiffer College in Misenheimer, NC, where he was a founding member of Alpha Kappa Psi business fraternity and a member of the soccer team. He was captain of the 1970 - 71 soccer team and was twice-named to the NAIA All-District team. In 2012, he was inducted into the Pfeiffer Athletic Hall of Fame. After graduating from Pfeiffer in 1971, John K enlisted and served two years in the US Army, and earned his MBA from Tulane University in New Orleans in 1975. John K joined the Pfeiffer College business school faculty and ran a successful screen-printing business in Concord. He later followed in the footsteps of his parents and sister as a public school educator, working for many years as a substitute teacher in Cabarrus County. John K was a favorite of many of the students he taught. He continued his life-long love of athletics by organizing Concord’s first soccer team and by playing in and refereeing volleyball tournaments around the state. John K also always looked forward to reuniting with his many high school and other friends at the annual Spiders on the Beach event in Myrtle Beach. After health setbacks in 2014, John K was cared for by his devoted sister until her death in 2018, and then by the devoted staff at Best of Care Assisted Living in Kannapolis, NC. The family will receive friends and relatives on Friday, February 12 at 10 to 10:45 am at Lady's Funeral Home with funeral services at 11:00 am in the Chapel followed by a committal service at Oakwood Cemetery. Services will also be streamed live at https://www.ladysfuneralhome.com/live/. In lieu of flowers, memorials can be made in memory of John K McInnis to: The Nick and Reba Lefko Endowed Scholarship Pfeiffer University P.O. Box 960 Misenheimer, NC 28109

The family of John Knox McInnis created this Life Tributes page to make it easy to share your memories.

Send flowers to the McInnis family.