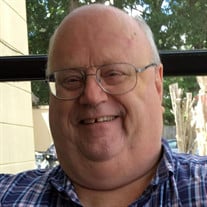 John Charles Wahl passed away peacefully in his Salisbury, NC home on Wednesday, April 21, 2021, at the age of 72. The likely cause was heart disease, a condition he had struggled with previously. John was born on May 27, 1948 in Wellsville, NY to Gerald Ayers Wahl and Flora Henrietta (Flint) Wahl. He grew up causing trouble with his only brother, Jerry, and lending a helping hand to relatives and neighbors on local dairy and poultry farms. After earning an associate’s degree from Alfred Agricultural College (Alfred, NY), he served in the Peace Corps from 1968-1970 teaching poultry farming methods in rural India. This post inspired John’s firm belief that vocational education can provide a stepping stone to a prosperous life. Upon his return to the U.S., John continued his education at Cornell University (BS 1973), where he met the love of his life, Beth Leggett Cameron: they married on May 27, 1978 in Warsaw, NY. He taught vocational courses at Alfred Agricultural College and Letchworth High School (Gainesville, NY) before continuing his education to transition to administration. He earned an MS from Auburn University (Auburn, AL) and a PhD in higher education administration from the University of Florida (Gainesville, FL), in which he applied the cusp catastrophe model to faculty job satisfaction; his only daughter, Mary Elizabeth Wahl, was born shortly after his thesis defense in 1987. John served in numerous Dean and Director positions in higher education throughout the country, including South Georgia College (Douglas, GA); the Iowa Western Community College system; the American Institute of Commerce (Davenport, IA); and the Uintah Basin Applied Technology College (Roosevelt, UT). He was particularly proud of helping make courses accessible to high school students so that they could get a head start on their careers free of charge. He retired in 2013 and relocated to Salisbury, NC to be near family. John became an active member of the religious and service communities in any town he called home. He helped form and/or lead Rotary chapters in Clarinda, IA and Roosevelt, UT; directed the Southwestern Iowa and Quad Cities chapters of Habitat for Humanity; volunteered at the Clarinda Academy (Clarinda, IA); was a Blue Lodge Freemason/Shriner/Scottish Rite member in Oakland Lodge #359 (Castile, NY), Ashley Valley Lodge #20 (Vernal, UT), El Kalah Shrine (Uintah Basin, UT), and Spencer Lodge #543 (Spencer, NC); served as an EMT in Camp Hill, AL; and provided grant-writing support to many local charities, most notably John Lewis Community Services and Covenant Financial Services (both in Davenport, IA). John especially enjoyed organizing community fundraisers: he was known to build and operate custom meat cookers to serve warm meals to hundreds of guests. He was also active on the vestry of several churches, including St. John’s Episcopal Church (Shenandoah, IA); St. Peter’s Episcopal Church (Bettendorf, IA); St. Elizabeth’s Episcopal Church (Whiterocks, UT); and Christ Episcopal Church (Cleveland, NC). John was a loving father and grandfather who enjoyed teasing his family with tall tales. He shared many hobbies with his daughter Mary, including computing (“before it was cool”), caring for exotic pets, and playing chess. He recently enjoyed entertaining his grandson, Isaac, via FaceTime. He also managed to find time in his already vibrant life for gardening, genealogy, road trips, and good recipes. John was preceded in death by his sister, Mary Ann Wahl, and his parents, Gerald and Flora Wahl. He is survived by his former wife, Beth Cameron of Beavercreek, OH; his daughter, Mary Wahl, son-in-law, Nick Hutzler, and grandson, Isaac Orin Hutzler of Pasadena, CA; his brother, Jerry Wahl, and his wife, Lori; his niece, Maryann Martinez and her husband, Jose Luis; his nephew, Daniel Wahl and his wife, Tạ Ngọc Trâm; his niece, Rachel Freitas, and her husband, Trevor; his grandnieces/grandnephews, Alexis, Viviana, Troy, Owen, and Claire; and countless cousins, friends, and colleagues across the U.S. A memorial service in John’s honor will be held at a time and place to be determined after pandemic restrictions are lifted. Please contact Mary ([email protected], (626) 399-3723) if you are interested in receiving details of the service when they become available; stories and photos from his life are also welcomed. John requested that remembrances be directed as service or donations to the organizations he supported in life, or to the charity of your choice.

John Charles Wahl passed away peacefully in his Salisbury, NC home on Wednesday, April 21, 2021, at the age of 72. The likely cause was heart disease, a condition he had struggled with previously. John was born on May 27, 1948 in Wellsville,... View Obituary & Service Information

The family of John Charles Wahl created this Life Tributes page to make it easy to share your memories.

John Charles Wahl passed away peacefully in his Salisbury, NC...

Send flowers to the Wahl family.