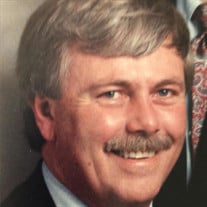 John Datus Washburn passed away on March 5, 2021 with those he loved & cherished by his side. John was born on May 15, 1950 to Floy Gertrude Brooks & the late Robert Eugene Washburn in Cherryville, NC. In addition to his mother, John is survived by his wife Pat Washburn & his children, Jason Washburn of Concord, NC, Matthew Washburn of Kannapolis, NC, & Josh Washburn of Charlotte, NC. He is also survived by his sister Trudy Smith, two daughter-in-laws, Phet & Holley, as well as his five grandchildren, Shayna, Noah, Nick, Maddox, & Lia. John graduated from Cherryville High School in 1968 before attending his beloved University of North Carolina at Chapel Hill where he earned a degree in Industrial Relations with a minor in Psychology as a member of the Class of 1972. John was “Tar Heel born & Tar Heel bred,” as the alma mater states & regularly attended football & basketball games as he never missed an opportunity to return to campus. It is only fitting that UNC beat Dook the day after his passing with an extra player on the bench. John worked in Goldsboro, NC & Asheboro, NC before settling down with his family in Concord, NC as the Human Resource Manager for Pass & Seymour, Legrand until he retired. He would often speak of the joy & pride he took in cooking steaks for everyone at “the plant” during the holidays & revered the many friendships he was fortunate enough to make with those that worked alongside him. John will always be remembered for his selflessness & strong will in which he would do anything to help someone in need & keep others from feeling sadness or pain until the very end. He saw happiness on the golf course & on a boat with a fishing rod in hand. He loved watching his children & grandchildren compete in sports as they grew & also found peace with his wife on the ocean where they spent most of their summers vacationing. Those who have had the pleasure of knowing & loving him will miss him immensely. A memorial service is scheduled for 2:00 pm Sunday, July 11, 2021 at Lady's Funeral Home Chapel. Pastor David Rabb will officiate. The visitation will be Sunday, July 11, 2021 from 1 to 2:00 pm at Lady's Funeral Home.

John Datus Washburn passed away on March 5, 2021 with those he loved & cherished by his side. John was born on May 15, 1950 to Floy Gertrude Brooks & the late Robert Eugene Washburn in Cherryville, NC. In addition to his mother, John is survived... View Obituary & Service Information

The family of John Datus Washburn created this Life Tributes page to make it easy to share your memories.

Send flowers to the Washburn family.