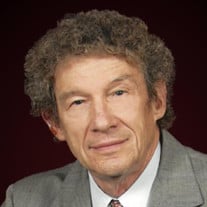 Mr. Johnny William Christy, 86, passed away Friday, January 14, 2022. A funeral service is scheduled for 12:30 pm Saturday, January 22, 2022, at Trinity United Methodist Church. Rev. James "Jim" Watford and Rev. Kirk Tutterow will officiate. Interment will follow at Mt. Mitchell United Methodist Church Cemetery. The family will receive friends from 11 to 12:00 pm Saturday at Trinity United Methodist Church Fellowship Hall. Per the family's request, masks will be required and social distancing is highly encouraged. Mr. Christy was born October 9, 1935 in Kannapolis. He was a son of the late Van Roosevelt and Mae Elizabeth Christy. He was a graduate of Winecoff High School and received his Bachelors and Masters degree from Appalachian State University. Upon his graduation from college, Mr. Christy taught chemistry at Concord High School for six years, after which he joined Colors, LLC as Marketing Vice President selling textile dyes and chemicals to the textile industry. Colors, LLC merged later with Ciba-Geigy and formed a joint venture with headquarters in Hong Kong. This provided an opportunity to travel Europe, China, India and Japan seeking sales and services for their products. He was an active member of Mount Mitchell United Methodist Church in Kannapolis for many years, teaching Sunday School for forty years, Choir Director, Administrative Board and many other Committees. In March 2008, he married Shirley Land Christy. He then became an affiliate member of Trinity United Methodist Church to be with his wife, where he continued to sing in the choir. He loved southern gospel music and sang in a gospel quartet which traveled to numerous churches in his earlier years. In his later years, and even to two weeks prior to his passing, he would sit up in the wee hours of the morning listening to gospel music where he always found a sense of peace. He was preceded in death by his former wife of 47 years, Betty Collins Christy; and brother, James "Jim" Christy. Mr. Christy is survived by his wife, Shirley Land Christy; sister-in-law, Bonnie Christy; nieces, Noelle Baker and husband Dupree of Kannapolis, Brenda Cumbee and husband Archie of Fuquay-Varina, Jackie LeFever of Fayetteville, Barbara Sullivan and husband Bobby of Salisbury, and Deborah Lilly of Greenville; nephews, Matt Christy of Concord, Les Robinson and wife Vonda of Greenville, and Joe Manning and wife Christy of Greenville; and many other loved nieces and nephews. In lieu of flowers, memorials may be sent to Mount Mitchell United Methodist Church, 6001 Old Salisbury-Concord Road, Kannapolis, NC 28083 or to Trinity United Methodist Church, 416 Martin Luther King Jr. Avenue, Kannapolis, NC 28083. He had a wonderful life and the difficult part was leaving behind those who meant so much. However, the best part is knowing he will see them again. Mr. Christy always thought life was a journey and we are all just all passing through to reach our final destination which is a home in Heaven called paradise which God has prepared for all Christian believers. He has reached his final destination.

The family of Johnny William Christy created this Life Tributes page to make it easy to share your memories.

Send flowers to the Christy family.