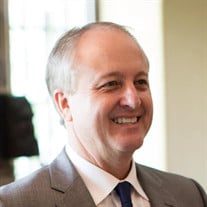 Joseph Ladd Helms died on March 19, 2021 after a brief illness with cancer. He spent his last days on the family farm in China Grove, surrounded by his family, who cared lovingly for him through the final weeks of his life. He was a noble man who smiled and laughed often with the people he loved, was not burdened by fear, and expressed much gratitude for the life he has enjoyed. Joe was born to the late Curtis Lee Helms and Becky Roberts Drye on June 3, 1961. Joe was an Eagle Scout, a 1979 graduate of South Rowan High School, and a 1983 graduate of Appalachian State University with a B.A. in music. He enjoyed 15 years working with McFadyen Music, and served as an account manager with Asurion during the past 12 years. Joe’s family and friends learned so much from him as he embraced life, and as he embraced death. He lived joyfully and with a light heart throughout his life. He had a deep and abiding love for his family, and treasured every minute he had with them. He adored Julie, his dear wife of 39 years. He treasured his time riding his motorcycle alongside his son JT. He delighted in trips to Chicago to visit his son Josh, Shannon, and his 2 year-old grandson Henry. And he enjoyed relaxing in Charleston with his daughter Lindy and Harrison, who are soon to be parents of baby girl Luna June. The gift of his deep love for his family was returned to Joe in full measure as they rallied around him and tenderly cared for him through his final days. Music was one of Joe’s greatest joys. A drummer and a guitarist, Joe had a great appreciation for fine musical instruments. Joe learned piano as a child, and played saxophone in the South Rowan High School band. He shared his passion for music with his children and nephews, encouraging and gifting them with musical instruments and gear. His son Josh was a Miriam Cannon Hayes scholar, and concertmaster in the Appalachian State University Symphony while earning his undergraduate degree. Family gatherings always include song circles, and Joe was a standing member of the band. An avid sports enthusiast, Joe was a lifetime Tarheels fan. He absorbed and shared history and detailed facts about Tarheel basketball, the players, and the coaches. Dean Smith was a big influence on Joe’s life, and he was inspired by Smith’s success on the court, his integrity, and his commitment to developing his players into successful and honorable men. Joe grew up riding dirt bikes with his brother Mark and friends, and reconnected with his joy for motorcycles last year. When his eldest son, JT, rode his Triumph motorcycle from Chicago back home to the Carolinas in March of 2020, Joe surprised him by buying an Indian motorcycle so they could go on riding adventures together. They spent the past year exploring countless local country roads, the Uwharrie mountains, Blue Ridge Parkway, Grayson Highlands, and Highway “The Snake” 421. In Joe’s honor, JT plans to ride his father’s Indian across the country. All who know Joe will remember his happy smile, his strong hugs, his hearty laugh, and the kindness he offered everyone. Joe was quick with a joke, and he loved telling stories. Julie was the love of his life, and they were inseparable for nearly 40 years. They invited Julie’s mother Anne Smith into their home years ago, and they cared for her lovingly until her death in 2020. They lived in Salisbury with their dogs, Arthur and Olivia. Joe is survived by his wife Julie; son JT Helms of Charleston, SC; son Josh Helms (Shannon) and their little son Henry of Lombard, IL; daughter Lindy Croft (Harrison) of Charleston, SC; mother Becky Drye of China Grove, NC; sister Anne Corriher (Clark) of China Grove, NC; brother Mark Helms of China Grove, NC; brother-in-law Roy Smith (Dolores) of Houston, TX; brother-in-law Paul Smith (Nora) of Waynesville, NC; nephews and nieces James Corriher (Courtney) and their little children Aiden and Ava; Mindy Corriher; Eli Helms; Ben Helms; Gabe Helms; Shelly Rutherford; Cooper Brownell; Carson Brownell; Steve Smith Jr.; Paul Smith Jr.; and countless cousins, aunts, uncles, and dear friends. Joe’s life will be celebrated by his family at a private graveside memorial service. In lieu of flowers, the family requests that donations be made to Main Street Marketplace (Main Street Mission), 306 South Main Street, China Grove, NC 28023; and St. Jude’s Children’s Hospital, Memorial Giving, 501 St. Jude Place, Memphis, TN 38105.

Joseph Ladd Helms died on March 19, 2021 after a brief illness with cancer. He spent his last days on the family farm in China Grove, surrounded by his family, who cared lovingly for him through the final weeks of his life. He was a noble man... View Obituary & Service Information

The family of Joseph Ladd Helms created this Life Tributes page to make it easy to share your memories.

Send flowers to the Helms family.