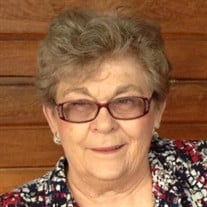 Mrs. Joyce Patricia McKinney Deal, 85, passed away Monday, September 6, 2021, at Liberty Commons Nursing and Rehab Center in Salisbury. A memorial service is scheduled for 4:00 pm Thursday, September 9, 2021, at Lady's Funeral Home Chapel. Pastor Carlton Davidson will officiate. The family will receive friends from 2 to 3:45 pm Thursday at Lady's Funeral Home. The service will be streamed live at www.ladysfuneralhome.com/live. Mrs. Deal was born August 25, 1936 in Cabarrus County. She was a daughter of the late Claude McKinney and Carrie Rogers McKinney. She was a member of Branchview First Church of God, where she was a faithful member and servant and was a huge part of her life. She graduated in 1957 from the Cabarrus County Hospital School of Nursing and worked for 15 years at Cabarrus Memorial Hospital. In 1972, she started teaching Health Occupations at A.L. Brown High School before retiring in 1997. Joyce was a member of the Board of Directors for the Cabarrus Nursing School Alumni Association. In September 2013, she was the first recipient of the Alumni Spirit Award for all of her volunteer work for the school. She made an impression on her students and touched many lives through her nursing and teaching careers. She had a giving spirit taking care of her aunts and uncles when they were sick. She spent her life giving to others and never worried about herself. She was a true servant of God with a servant's heart. In addition to her parents, she was preceded in death by a son, Jerry Thomas Deal, Jr. and his wife Nancy. Mrs. Deal is survived by her husband, Jerry T. Deal, Sr.; daughter, Debbie Thompson and husband Kevin of Troutman; two sons, Gary Deal and wife Stephanie of Kannapolis and Terry Deal and wife Tina of Mooresville; two sisters, Elaine Elms of Wingate, NC and Carol McFarland of Kannapolis; brother, Max McKinney of Kannapolis; seven grandchildren, Casey Deal, Taylor Deal, Hunter Deal, Holli Ann Deal, Riley Thompson, Lainey Thompson and Tom Deal; and two great grandchildren, Levi and Ashton Deal. Memorials may be sent to the Cabarrus College of Health Sciences c/o Cabarrus Healthcare Foundation, 920 Church Street North, Concord, NC 28025 or online at https://cabarrushealthcarefoundation.org/cabarrus-college-of-health-sciences/.

The family of Joyce Patricia McKinney Deal created this Life Tributes page to make it easy to share your memories.