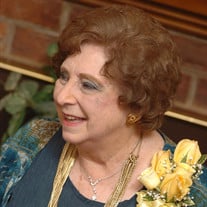 Dr. Martha Frances Strawn Iley, 95, was promoted to the Church Triumphant on June 25, 2020 at her beloved home and surrounded by her family. Classical musician, wife and matriarch, philanthropist, hostess, academician, teacher, artist, ordained minister, writer, woman of deep Christian faith-Martha made every moment in life count, especially where it concerned her family and service to God and community. Born June 1, 1925 to Dr. Stephen Hasty Strawn and Mrs. Lila Faircloth Strawn in Marshville, N.C. (a dentist and a schoolteacher), Martha was the oldest of four siblings. She had an idyllic childhood and excelled in academics, music and fine arts, and debate. A lifelong student of learning, Martha’s higher education began with a BA in music and social science from East Carolina University in 1946, followed by an MA from Western Kentucky U., Master of Music from Winthrop U., Master of Education from UNC-Charlotte, Doctor of Education from Nova U., capped by a Master of Theological Studies from Gordon-Cromwell Theological Seminary in 1998. A very accomplished musician, Martha used her gifts as a vocalist and pianist to entertain, teach and serve Christ. In addition to private music lessons (which she continued up until just a few months before her passing), Martha taught piano, voice and theory at Charlotte area public and private schools as well as CPCC. She was very active in numerous professional musical affiliations, just a few being the NC Music Teachers Association (V.P), Charlotte Piano Teachers’ Forum (President), Queen City Music Club (Charter Member and VP) and Charlotte-Mecklenburg Clergy Association. She was a frequent judge in voice and piano competitions. Although known primarily for her prominence in the music world, Martha was also a talented artist and studied under the world- renowned late Paul Bartlett. Her family treasures to this day her beautiful paintings, needlework and ceramics. A skilled writer, Martha authored a collective memoir on music teaching, human interest essays, papers and articles on music, creativity, fine arts, theology, church history, music and worship, and was editor of several newsletters. She and her late husband of 61 years, Bryce Baxter Iley, loved offering their home for family/friend celebrations and social get-togethers with food, fellowship and lots of music. They were well known in the community as gracious and giving hosts. In 1985, Martha was ordained to the Gospel Ministry in Music and Social Service through Providence Baptist Church in Charlotte, where she and Bryce were charter members. Martha’s journey to ordination began in July 1976 when she became aware of a spiritual directive to use her musical talents and her faith to bring the gospel to unlikely, dreary places such as jails, homeless shelters, hospitals, rehabilitation centers and nursing homes, places Martha was already visiting and where she was dubbed “the Music Lady”. She later described it as “mystical Call to do something special in the Kingdom’, which resulted in her founding of the Metropolitan Music Ministry, Inc. in 1984 and it continues in operation. MMM has presented over 12,000 services or performances, over 500,724 persons have attended programs hosted by the organization and over 74 scholarships have been awarded to deserving musical students (please see www.metromusicministries.org). On October 1, 2015, an article about Martha and MMM was featured in the Charlotte Observer. Of the many awards and recognitions that Martha received throughout her life, two of her favorites were the 2002 Distinguished Alumni Award from ECU School of Music and in 2019, the dedication of the Martha Iley Music Library at Providence Baptist Church, honoring the many years of choral service Martha provided there and for many other area churches. She was particularly proud of the Cultural Arts Program she developed at CPCC in 1980 which helped provide greater accessibility for elderly and handicapped persons to local visual, literary and performing artists. The Program received national attention in 1981 and was included in the project directory of the Public Policy Symposium on the Arts, Humanities and Older Americans at the White House Conference. Martha is preceded in death by her parents, her husband Bryce, daughter Mrs. Cheryl (Prentiss) Lindstrom, grandson Joshua McLean and siblings Joy Barbee, Stephen Strawn, Jr., and Helen Purdy. She is survived by her daughters Mrs. Deborah (Richard) Hodde; Mrs. Sheila (David) McLean; Mrs. Stephanie (Daniel) Salb; four sons-in-law; grandchildren Sharon (Isaac) Miller, Stephen (Megan) Hodde, Jeremy (Kendra) McLean, Kristen (Benjamin) Ligotino, Hailey Lindstrom, Carmen Salb, Alexander Salb, Charlotte Salb and thirteen great-grandchildren (which includes two sets of twins), many nieces and nephews and a host of friends, all of whom cannot imagine life without her. A private family burial service will be conducted at Carolina Memorial Park, with a public memorial service to be announced as soon as current health restrictions are lifted. In lieu of flowers, donations may be made to MMM, P.O. Box 12736, Charlotte, NC 28220-2736 or see web address above.

The family of Dr. Martha Frances Strawn Iley created this Life Tributes page to make it easy to share your memories.

Dr. Martha Frances Strawn Iley, 95, was promoted to the Church...

Send flowers to the Iley family.