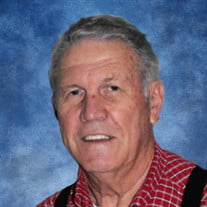 Mr. Martin Frank Barbee, 77, formerly of Concord, passed away Friday, June 28, 2019, at Huntersville Oaks. A funeral service is scheduled for 11:00 am Monday, July 1, 2019, at Crosspointe Baptist Church. Rev. Leon Hawks will officiate. Interment will follow at Carolina Memorial Park in Kannapolis. The family will receive friends from 10 to 10:45 am Monday at Crosspointe Baptist Church. Mr. Barbee was born May 7, 1942 in Midland. He was a son of the late Roy William Barbee, Sr. and Ava Idell Furr Barbee. After graduating from Bethel High School, he was married to the love of his life, Deloris Ann Edwards, for 56 years. He worked for Atrium Health and retired after 32 years of service. He was an active member of Odell Baptist Church for over 50 years, where he was a Deacon. He also served on the Building and Grounds and Fellowship Committee, helped in the Children’s Department with VBS, AWANA and Sunday School and was also a member of the choir. He always put God first in everything he did, and it was a true reflection of the life he lived. In addition to his parents, he was preceded in death by his brother, R.W. Barbee, Jr.; sisters, Edna Barbee, Betty Stewart and Irene Campbell; and grandson, Remington Barbee. In addition to his wife, Mr. Barbee is survived by daughter, Julie Moore and husband Trevor; son, Jason Barbee; and six grandchildren, Blake, Madison, Annsley, Ryan, Levi and Amelia. He also leaves behind his sister, Wilma Clontz; and brother-in-law, Richard Stewart. Memorials may be sent to Crosspointe Baptist Church, 1175 Crosspointe Drive, Concord, NC, 28025.

The family of Martin Frank Barbee created this Life Tributes page to make it easy to share your memories.

Send flowers to the Barbee family.