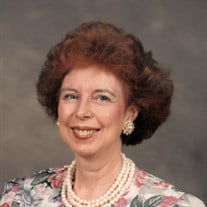 Mrs. Polly Jo Maxwell Fincher, 85, passed away Tuesday, April 20, 2021, at Atrium Health Cabarrus in Concord. A funeral service is scheduled for 2:00 pm Friday at Kannapolis West "A" Church of God. Dr. Greg Sloop and Rev. Demps Overcash will officiate. Interment will follow at West Lawn Memorial Park, China Grove. The family will receive friends from 1 to 1:45 pm Friday at the church prior to the service. Mrs. Fincher was born April 25, 1935 in Danielsville, GA. She was a daughter of the late Omar Maxwell and Alma Arey Bragg Wood. She was a member of Kannapolis West "A" Church of God. Polly worked for 30 years as an inspector in the sheet department and towel cutting department of Cannon Mills. In addition to her parents, she was preceded in death by a son, Danny Thomas Fincher in 2005. Mrs. Fincher is survived by her husband, John A. Fincher, daughter, Rebecca F. Cranford of Kannapolis, daughter, Beverly F.Hammond of Rollo, MO son, John "Sonny" Fincher, Jr. , and wife Betty of Ocean Isle Beach, NC., son Richard David Fincher and wife, Audra of Kannapolis. She has five grandchildren and seven great-grandchildren and a step-sister Asia Smith. Memorials for Mrs. Fincher may be made to the Kannapolis West "A" Church of God, 2211 West "A" Street, Kannapolis, NC 28081.

The family of Polly Jo Maxwell Fincher created this Life Tributes page to make it easy to share your memories.

Send flowers to the Fincher family.