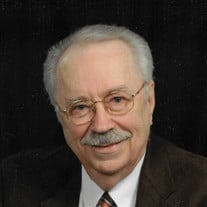 Mr. Ralph Excell Brigman, 93, lifelong resident of Kannapolis, passed from death to life eternal on Sunday, November 3, 2019. A funeral service is scheduled for 2:00 pm Wednesday, November 6, 2019, at First Baptist Church. Dr. Tom Cabaniss will officiate. Interment will follow at Carolina Memorial Park in Kannapolis. The family will receive friends from 12:30 to 1:45 pm Wednesday at First Baptist Church prior to the service. Ralph was born February 28, 1926 to the late George E. Brigman and Ora L. Brigman. When his mother died several days after his birth, his maternal grandmother, Lillie L. Litaker, opened her home to him. Ralph was a graduate of J.W. Cannon High School, class of 1943 and retired from Cannon Mills Company with 45 years of service. After retirement, he joined Lady's Funeral Home and served there for 30 years, as well as working part time for the State Employees' Credit Union. His favorite avocation was music. A devout Christian and self-taught pianist and organist, he directed the choir at North Kannapolis United Methodist Church from 1965-2005 and also at St. John's United Church of Christ for 10 years during that time period. Over the years, he taught Sunday School to many age groups and was a certified Lay Speaker. Ralph will be remembered as a man who loved the Lord, his family and his church. He always had a listening ear and a song in his heart. In addition to his parents, he was preceded in death by his beloved wife of 56 years, Wilma Estelle Sides Brigman; and daughter, Kimberly Wrenn Brigman. He is survived by two daughters, Julie Brigman and Danita Rickard and husband Hearne, both of Kannapolis; three grandchildren, Amy Rickard of Chapel Hill, Alex Rickard and wife Mari of Fuquay-Varina and Daniel Flora and wife Melinda of Kannapolis; two great granddaughters, Liana and Kiersten Rickard; and sister, Doris Rufty of Franklinville. Memorials may be sent to First Baptist Church Music Ministry, 101 N. Main Street, Kannapolis, NC 28081 or to St. Jude Children's Research Hospital, 262 Danny Thomas Way, Memphis, TN 38105.

The family of Ralph Excell Brigman created this Life Tributes page to make it easy to share your memories.

Send flowers to the Brigman family.