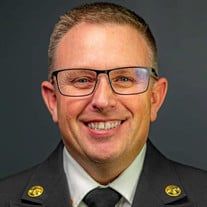 Mr. Richard "Rick" Michael Barnhardt, Jr., 50, passed away Wednesday, November 25, 2020. A funeral service is scheduled for 1:00 pm Tuesday, December 1, 2020, at Charity Baptist Church. For anyone unable to attend, the service will be live streamed here. Interment will follow at Carolina Memorial Park in Kannapolis. The body will lie in-state from 10:00 am to 12:00 pm Tuesday at Charity Baptist Church. Mr. Barnhardt was born December 30, 1969 in Concord. He was a son of Richard Michael Barnhardt, Sr. of Rockwell and Cynthia Davis Hess and husband Jack of Clover, SC. Rick started his fire service career as a volunteer with the Royal Oaks Volunteer Fire Department (now Kannapolis Station #3) when he was 16 years old. He worked for Salisbury Fire Department from 1992-1997. Rick became a Captain in 2000, Battalion Chief in 2006, Division Chief in 2007 and attained Fire Chief in June 2019. He retired from Kannapolis Fire Department in March of this year, after 30 years of service. Rick was an avid king mackerel fisherman and especially enjoyed spending time at the Apache Pier with his daughter and son. He was well known across the area for his culinary skills with BBQ, ribs and world famous banana pudding. He also had a passion for hunting with his son. As passionate as he was for the fire service, nothing took precedence over his love for his wife and kids. In addition to his parents, Rick is survived by his wife, Kimberly Mabrey Barnhardt; four children, Caleb Barnhardt and wife Cassidy, Hannah Barnhardt, Sarah Barnhardt and Rebekah Efird and husband Matthew, all of Rockwell; sister, Lori Good of Concord; two brothers, Jason Clay and Wesley Clay, both of Jacksonville, FL; and many extended family and friends. Memorials may be sent to Kannapolis Firefighters Assistance Foundation, PO Box 706, Kannapolis, NC 28082. Due to current COVID mandates, all attendees must wear a face mask.

The family of Richard "Rick" Michael Barnhardt Jr. created this Life Tributes page to make it easy to share your memories.

Send flowers to the Barnhardt family.