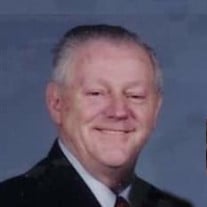 Mr. Ronald "Ron" Reuben Maguire, 82, passed away Wednesday, January 22, 2020, at his home in Kannapolis. A memorial service is scheduled for 11:00 am Saturday, February 1, 2020, at First Presbyterian Church. Dr. Stuart Bond will officiate with the Cabarrus County Veterans Honor Guard rendering Military Rites. The family will receive following the service. Mr. Maguire was born May 30, 1937 in Summit, NJ. He was a son of the late Clarence Willard Maguire and Margaret Isabelle Marsh Maguire. He was a veteran of the U.S. Army, a member and Past Commander of American Legion Post 228 (Springfield, NJ) and a Past Rotarian. He retired from the United States Postal Service as a mail carrier. In addition to his parents, he was preceded in death by a sister, Jean Annette Quinton; and two brothers, Charles Edward Maguire and Robert Willard Maguire. Ron is survived by his wife of 55 years, Virginia Gregory Maguire; two daughters, Linda Anne Grebler and husband Thomas of Kannapolis and Lori Elen Maguire of Concord; four grandchildren and four great grandchildren. Memorials may be sent to Hospice & Palliative Care of Cabarrus County, 5003 Hospice Lane, Kannapolis, NC 28081 or The National Museum of the US Army C/O The Army Historical Foundation, Attention Beth Seaman, 1775 Liberty Drive, Suite 400 Fort Belvoir, VA 22060.

The family of Ronald Reuben Maguire created this Life Tributes page to make it easy to share your memories.

Send flowers to the Maguire family.