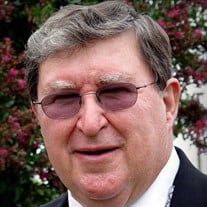 Dr. Watson Hewell Black, 85, passed away Monday, February 1, 2021, at Atrium Health University City in Charlotte. A private memorial service will be held. Dr. Black was born June 25, 1935 in Roanoke, VA. He was a son of the late Dr. Watson C. Black and Ella Sue Binns Black. Dr. Black graduated from Lee Edwards High School in Asheville. He attended Houghton Wesleyan College and graduated from Mars Hill College and Southern College of Optometry in Memphis, Tennessee. He served in the US Army, where he was stationed at Fort Bragg and Camp Zama, Japan. Dr. Black was on staff at Johnson City, TN Eye Hospital from 1965 to 1971. He then joined the Optometric Practice of Dr. D. A. Finger and was then in private practice on McLain & Centergrove Road in Kannapolis until 1996 when he retired and sold his practice to Cabarrus Eye Center, where he worked part time for a few years. Dr. Black was a member of Trinity United Methodist Church and the Darrell Hinnant SS Class. In addition to his parents, he was preceded in death by his infant son, Michael Worth Black. Dr. Black is survived by his wife, Peggy Black; two daughters, Kimberly Owensby and husband Mark and Pamela Strader and husband Ricky; grandchildren, Breanne Owensby, Rachel Strader and Ethan Strader, all of Kannapolis; brother, Dr. Robert Black and wife Judy of Central, SC; three sisters-in-law, Barbara McFall, Pat Blankenship and Helen O'Kelley of Asheville; five nieces and nephews; and several cousins. In lieu of flowers, memorials may be sent to Trinity United Methodist Church, 416 East 1st Street, Kannapolis, NC 28081, Kannapolis First Wesleyan Church Kitchen Fund, 301 Bethpage Road, Kannapolis, NC 28083 or to Southern Wesleyan University, P.O. Box 1020, Central, SC 29630. The family would like to give a special thanks to Dr. Christopher Connelly, Tamara Oliver and Jill Scruton who took such good care of him. The family also wants to thank their friends and neighbors who were supportive of him and the family. The family appreciated the quality and compassionate care by Atrium Health Cabarrus and Atrium University ER and COVID units.

Dr. Watson Hewell Black, 85, passed away Monday, February 1, 2021, at Atrium Health University City in Charlotte. A private memorial service will be held. Dr. Black was born June 25, 1935 in Roanoke, VA. He was a son of the late Dr. Watson... View Obituary & Service Information

The family of Dr. Watson H. Black created this Life Tributes page to make it easy to share your memories.

Send flowers to the Black family.