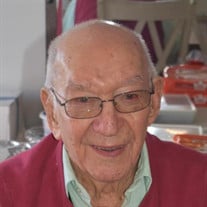 Mr. William Floyd "Toot" Rodgers, Jr., 97, passed away Sunday, January 24, 2021, at his home. A funeral service is scheduled for 3:00 pm Thursday, January 28, 2021 at Lady's Funeral Home Chapel. It will also be live streamed at: https://www.ladysfuneralhome.com/live/. Interment will follow at Bethpage Presbyterian Church Cemetery. Military Honors will be provided by the Cabarrus County Veterans Honor Guard. The family will not be receiving friends, but Mr. Rodgers will lie in state Thursday from 9 to 12:00 pm at Lady's Funeral Home for those that wish to pay their respects. The family asks that all attendees wear masks and practice social distancing. Mr. Rodgers was born December 15, 1923 in Cabarrus County. He was a son of the late William Floyd Rodgers, Sr. and Mabel Winecoff Rodgers. Mr. Rodgers graduated from Winecoff High School. He retired from Coca Cola Company after 43 years of service. He was a World War II Veteran of the US Army, serving with the 90th Infantry Division in Europe. He was a past President of the Winecoff Lions Club. He was a member of Bethpage Presbyterian Church, where he was Sunday School Teacher, for 50 years, an elder and sang in the choir for 70 years. In his younger years, Toot was an avid bird hunter. In addition to his parents, he was preceded in death by wife, Faye Millie Howard Rodgers; and brother, Rickard Rodgers. Mr. Rodgers is survived by two sons, William "Chuck" Rodgers, III and wife Lori and John R. Rodgers and wife Connie, both of Kannapolis; five grandchildren, Travis Rodgers and wife Elizabeth, Stacie Watts and husband Kyle, Sarah Hall and husband Travis, Allison Efird and husband Landon and Anna Baker and husband Brian; and 10 great grandchildren. Memorials may be sent to Bethpage Presbyterian Church, 6200 Mooresville Road, Kannapolis, NC 28081 or to Hospice & Palliative Care of Cabarrus County, 5003 Hospice Lane, Kannapolis, NC 28081.

The family of William Floyd Rodgers Jr. created this Life Tributes page to make it easy to share your memories.

Send flowers to the Rodgers family.