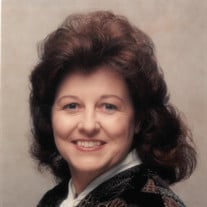 Mrs. Gayle Rice Posey, 69, went to be with the Lord on Friday, January 3, 2020, surrounded by her loving family after an extended illness. She fought valiantly and won the victory. A funeral service is scheduled for 2:00 pm Thursday, January 9, 2020, at Victory Temple. Rev. Garland Faw and Rev. Gary Posey will officiate. Interment will follow at Cabarrus Memorial Gardens in Concord. The family will receive friends from 12 to 1:30 pm Thursday at Victory Temple. Mrs. Posey was born June 26, 1950 in Greenville, SC and was raised in Travelers Rest, SC. She was a daughter of Betty Hindman Rice and the late Jerome Rice. She began playing the organ and piano in churches at an early age. She continued as a church musician for the rest of her life. She was a member and co-founder, along with her husband, Rev. Gary Posey, of Victory Temple, where she also served as church administrator. She sang beautifully, and led the Victory Temple Church Choir. She taught Sunday School for years. Many in the community know the books of the Bible for being in Gayle's Sunday School Class. She was also the producer of the telecast, "The Victory Revival Hour." She will be missed by so many that was blessed by her life. She loved and cherished her daughters and grandchildren, but her greatest love was working for the Lord. She was devoted to her husband and their ministry of 50 blessed years. Some of her early roles were that of being a dental assistant in Biloxi, MS, working at Shepherd's Jewelers in downtown Concord, and later being a manager at Wooten's Jewelry, also in downtown Concord during the 1980s, during a time when there were very few female managers in that industry. Later, she became the office manager at Randal Smith Dentistry. She was an avid crafter. She could sew, crochet, tat or decorate anything she set her mind to. Her hands were so gifted whether for her Lord or her family. She was preceded in death by father, Jerome Rice. Mrs. Posey is survived by her husband, Rev. Gary Posey of the home; two daughters, Laura P. Spurrier and husband Blake and Jennifer P. Flake, both of Mt. Pleasant; two sisters, Diane Page and husband Sidney of Easley, SC and Sandra Lance of Travelers Rest, SC; two granddaughters, Victoria Chandler-Posey and Kiersten Flake; one grandson, Trevor Brewer; mother, Betty Rice of Travelers Rest, SC; and mother-in-law, Betty Lucille Posey; and two god-daughters, Lisa Velazquez of Concord and Lauren Eagle and husband Brian of Salisbury. Memorials may be sent to Victory Temple, 3101 Cline School Road, Concord, NC 28025.

Mrs. Gayle Rice Posey, 69, went to be with the Lord on Friday, January 3, 2020, surrounded by her loving family after an extended illness. She fought valiantly and won the victory. A funeral service is scheduled for 2:00 pm Thursday, January... View Obituary & Service Information

The family of Gayle Rice Posey created this Life Tributes page to make it easy to share your memories.

Send flowers to the Posey family.