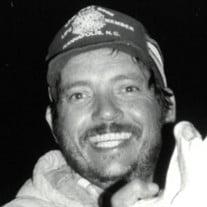 Mr. Joseph Andrew Robinson, 69, was called home to be with the Lord Saturday, July 25, 2020, at the Moses Cone Select Specialty Hospital in Greensboro. A graveside service is scheduled for 11:00 am Wednesday, August 5, 2020, at Salisbury National Cemetery. Rev. Leon Hawks and Father John Eckert will officiate. Military honors will be provided by the Rowan County Veterans Honor Guard. Mr. Robinson was born August 21, 1950 in Iredell County. He was a son of Laval Lambert Robinson and the late Dr. William Joseph Robinson. He was a member of the Poston-Perkins VFW Post 8989, where he was the Canteen Manager for more than 30 years. Mr. Robinson served his country honorably during the Vietnam War as an Army Special Forces Sniper. He volunteered for the Airborne Jump School at Ft. Benning, GA and was assigned to the 173rd Airborne Brigade. Mr. Robinson was critically wounded July 18, 1970, receiving the Bronze Star and Purple Heart. Mr. Robinson was an avid fisherman of all waters and truly loved sharing his passion and knowledge with all, especially his son and grandsons. He was known to always be there for family and friends. His sense of humor, heart-warming smile and laugh will always be missed. In addition to his father, he was preceded in death by his brother, William "Bill" Robinson. In addition to his mother, he is survived by his son, Joseph Robinson II and wife Casey of Rockwell; daughter, Susan Johnson and husband Chris of Landis; step-daughter, Tiffany White of Landis; fiancée, Ginger Jackson of Kannapolis; two sisters, Frances Burgess and husband Lynn and Kathy Swaringen and husband Mac, all of Kannapolis; two brothers, David Robinson and John Robinson and wife Laura, all of Salisbury; one grandson, Ryan Franklin; and two step-grandchildren, Josh Brewster and Zack Beasley.

Mr. Joseph Andrew Robinson, 69, was called home to be with the Lord Saturday, July 25, 2020, at the Moses Cone Select Specialty Hospital in Greensboro. A graveside service is scheduled for 11:00 am Wednesday, August 5, 2020, at Salisbury National... View Obituary & Service Information

The family of Joseph Andrew Robinson created this Life Tributes page to make it easy to share your memories.

Mr. Joseph Andrew Robinson, 69, was called home to be with the...

Send flowers to the Robinson family.