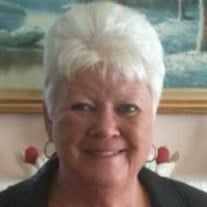 Mrs. Liane Margot Bauer Ballard, 71, passed away Wednesday, October 24, 2018, at Tucker Hospice House in Kannapolis. A memorial service is scheduled for 5:00 pm Saturday, October 27, 2018, at Lady's Funeral Home Chapel. The family will receive friends from 3:30 pm to 4:45 pm Saturday at Lady's Funeral Home. Mrs. Ballard was born December 8, 1946 in Worms, Germany. She was a daughter of the late Karl Bauer and Margot Durkas Bauer. She was a member of Kannapolis Moose Lodge #1722 where she was also a bartender. She would give the shirt off her back and not think twice about it. She would do anything for anybody. In addition to her parents, she was preceded in death by her husband, William "Bill" Houston Ballard, Jr.; and two brothers, Herbert and George Bauer. Mrs. Ballard is survived by her daughter, Sandra Marie Trujillo and husband Diego of Landis; two sons, Donald L. Ballard of Landis and John J. Ballard Denver, CO; sister, Annette Schalk and husband Stefan of Worms, Germany; sister-in-law, Heidi Bauer of Worms, Germany; two brothers, Karlheinz Bauer and wife Eva-Marie and Klaus Bauer and wife Gabby, all of Worms, Germany; four grandchildren; two great grandchildren; and niece, Angela Maria Medina of Worms, Germany. Memorials may be sent to Hospice and Palliative Care of Cabarrus County, 5003 Hospice Lane, Kannapolis, NC 28083.

The family of Liane Margot Bauer Ballard created this Life Tributes page to make it easy to share your memories.