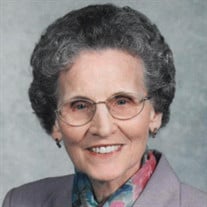 Mrs. Margaret Lucille Barringer Taylor, 98, went home to her Lord and Savior on August 19, 2020, at Caremoor Retirement Center in Kannapolis, where she had lived for almost six years after a bad fall. She had been in declining health for a number of years and seriously ill for three weeks. "Lucy" was born July 17, 1922 in Rowan County to the late Ernest W. Barringer and Clara Cline Barringer. She was the only girl out of five children. She lived in Kannapolis from the age of five. She graduated from J.W. Cannon High School in 1939. During her early years, she worked for Cannon Mills. She then worked for Terry Products retiring after 30 years. She married Wade L. Taylor in 1941, a marriage which lasted for 60 years until his death in October 2001. She was an active member of First Baptist Church in Kannapolis for many years, until she was no longer able to attend. She was active in her Sunday School Class, Joy in the Morning (watching the children in the nursery), was in charge of the prayer chain for many years and served as a greeter which she enjoyed the most. Known for the poppy seed bread she made, many people were recipients of this delicious bread when they were sick or visited the church. In addition to her parents and husband, she was preceded in death by her brothers, Melvin Barringer, Harold Barringer and Johnny Barringer, her son-in-law Wally Smith, and her best friend of over 50 years, Ruth Hampton. Left to cherish her memory are her two daughters, Barbara Smith, Tricia Wilson (Lew); three grandchildren, Jennifer Smith Burgess (Donnie), Rich Wilson (Cameron) and Brent Wilson (Cammie); six great grandchildren, Kendall Childers, Clint Wilson, Troy Wilson, Luke Wilson, Abel Wilson and Gideon Burns. She is also sruvived by one brother, Raymond "Turk" Barringer of Virginia and many nieces and nephews. A funeral service is scheduled for 2:00 pm Sunday, August 23, 2020, at Lady's Funeral Home Chapel. Rev. Alan Buckner will officiate. Interment will follow at Carolina Memorial Park in Kannapolis. The service will be live streamed. The body will in-state at Lady's Funeral Home from 3 to 5:00 pm Saturday and 9 to 1:00 pm Sunday at Lady's Funeral Home. In lieu of flowers, memorials may be sent to Hospice & Palliative Care of Cabarrus County, 5003 Hospice Lane, Kannapolis, NC 28081, Alzheimer's Association - Western NC Chapter, 4600 Park Road, Suite 250, Charlotte, NC 28207 or to the charity of the donor's choice.

Mrs. Margaret Lucille Barringer Taylor, 98, went home to her Lord and Savior on August 19, 2020, at Caremoor Retirement Center in Kannapolis, where she had lived for almost six years after a bad fall. She had been in declining health for a number... View Obituary & Service Information

The family of Margaret Lucille Barringer Taylor created this Life Tributes page to make it easy to share your memories.