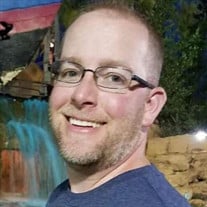 Samuel "Shane" Buchanan, 37, passed away Sunday, March 29, 2020, at Carolinas Medical Center in Charlotte. A private memorial service for the family will be held. A public service will be held when gathering restrictions are lifted. Shane was born March 5, 1983 in Charlotte. He was the son of Samuel Lee Buchanan and Teresa Riggs Dietz. Shane was a sales representative for Prime Time Sports Apparel and set the companies all-time top sales performance for the month of February. Shane loved God, his family, Carolina Tar Heels Basketball, the Dallas Cowboys and his dogs, or as he liked to call them 'his horses'. Shane loved laughter and could brighten anyone's day with his infectious smile and beautiful green eyes. He loved the thrill of roller coasters, Mountain Dew, F-150 trucks and food. Shane's most treasured loves were his 'girls', Lisa his wife and Haylee and Savannah his daughters. He did everything he could to make them feel special. Shane was his daughters’ biggest supporter and was so proud of their accomplishments. His face would light up when Lisa sang, especially the song "How Do I Live Without You" and goofing off with his girls was his favorite part to any day. Shane was a mama’s boy and always enjoyed his weekend trips to her home. He enjoyed country music concerts with his dad and their time together. There was no bond like the one he had with his sister Kasey. His love for everyone was much like his personality, larger than life. As so eloquently stated by his daughter Haylee, his heart may have failed him, but it never once failed us. "The ones that love us, never really leave us." He was preceded in death by his pawpaw, Jesse Buchanan; nana, Sherry Craig; and pawpaw, John Craig. Shane is survived by his wife, Lisa Furr Buchanan; two daughters, Haylee Nicole Buchanan and Savannah Hope Buchanan; mother, Teresa Riggs Dietz (Ronnie) of Hickory; father, Samuel Buchanan of Harrisburg; sister, Kasey Buchanan (Michael Golby) of Hickory; grandmother, Betty Buchanan; aunts and uncles, Sharon (Tom) Thomas, Kisha (Kirk) Beard, Curtis Buchanan and Jeff (Carla) Craig; mother and father-in-law, Judy and Gary Furr; sister-in-law, Cheryl (Dale) Chance; nephews, Ronan Golby, Gavin Chance and Connor Chance; and many cousins. In lieu of flowers, please contribute to college funds setup for Shane's girls, Haylee and Savannah. Please make checks to Lisa Buchanan, 263 Morning Dew Drive, Concord, NC 28025. During this difficult time, please send a “Hug from Home” to the family.

Samuel "Shane" Buchanan, 37, passed away Sunday, March 29, 2020, at Carolinas Medical Center in Charlotte. A private memorial service for the family will be held. A public service will be held when gathering restrictions are lifted. Shane... View Obituary & Service Information

The family of Samuel "Shane" Buchanan created this Life Tributes page to make it easy to share your memories.

Send flowers to the Buchanan family.