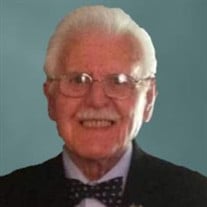 Mr. Staley Johnson, Sr., 100, went to be with his wife of 64 years on Thursday, June 10, 2021, at Tucker Hospice House in Kannapolis. May he rest in peace. He fought a good fight, he finished his course and he kept his faith. II Timothy 4:7-8 A funeral service is scheduled for 2:00 pm Monday, June 14, 2021, at Lady's Funeral Home Chapel. Rev. Trent Patterson, Rev. Ron Haithcock and Rev. Joy Garman will officiate. Interment with military honors will follow at West Lawn Memorial Park in China Grove. The service will be livestreamed at www.ladysfuneralhome.com/live. The family will receive friends from 11:30 to 1:30 pm Monday at Lady's Funeral Home. Mr. Johnson was born December 4, 1920 in Wilkes County, NC. He was a son of the late Jonus Franklin Johnson, Sr. and Nancy Elizabeth Mayberry Johnson. He enlisted in the U.S. Army on July 6, 1941 and proudly served during World War II where he received a Purple Heart after being seriously wounded in action near La Barre France. After serving 12 years in the Army, he would go on to serve an additional 10 years and retire from the National Guard. After his military service, he worked for and retire from Cannon Mills Plant 1 where he was a Lead Man. He was a member of North Kannapolis Wesleyan Church and Poston-Perkins VFW Post 8989. In addition to his parents, he was preceded in death by his wife, Nellie Victoria "Vickie" Foster Johnson; daughter, Pamela Kerr; son, Staley Johnson, Jr.; and nine brothers and sisters. Mr. Johnson is survived by two granddaughters, Carrie Johnson Walters and Sherry Johnson Dixon, who cared for their Pawpaw. His great grandchildren, Aaron "Aria" Ashburn, Alexis Bradshaw, Staley Jarrett Ashburn, Kailah Bradshaw and John Boy Dixon, assisted in providing love and care to their Pawpaw. He is also survived by a daughter, Kathy Johnson; a son, Jerry Johnson, Sr.; four additional grandchildren; 10 additional great grandchildren; and two great-great grandchildren. Staley received services from Meals on Wheels along with two in home sitters, "Angels", Roberta Hayes and Leslie Hayes-Cuthbertson. Old Soldiers never die they simply fade away. His service for his country and love for his family will never be forgotten. Memorials may be sent to North Kannapolis Wesleyan Church, 314 West 12th Street, Kannapolis, NC 28081.

Mr. Staley Johnson, Sr., 100, went to be with his wife of 64 years on Thursday, June 10, 2021, at Tucker Hospice House in Kannapolis. May he rest in peace. He fought a good fight, he finished his course and he kept his faith. II Timothy 4:7-8 A... View Obituary & Service Information

The family of Staley Johnson Sr. created this Life Tributes page to make it easy to share your memories.

Send flowers to the Johnson family.